She has come from a Halloween party to find him struggling in the bushes. A thin boy dressed as a pirate. His name is Steve.

He smiles. His teeth are perfect and white, a boy who has clearly worn braces.

The light from a streetlamp catches his unpatched eye, a sparkle of green, lined in coal black, and his cheek, a gentle shade of olive.

Such a handsome pirate, she thinks, and notes the delicate curve of his jaw bone and how his hair falls to his shoulders in dark curls the size of pennies.

He contorts his way to a more visible position. His costume looks expensive, made from fine fabrics: silk and soft wool. His white shirt is buttoned up to his neck and the sleeves balloon down his arms, ending in flirtatious ruffles at his wrists.

She is dressed as a witch. She spent a lot of time shopping for the perfect black dress that falls to the middle of her thighs, tattered and tight in all the right places.

He holds out his hand for her to take.

“A little help?” he asks, sheepishly. His fingers are warm and soft, and when he wraps them around her wrist and she stumbles toward him, she thinks how this will be a funny story, years from now, how they met in a bush on Halloween night.

He pulls her arm so hard that she flips clumsily over him and into the bushes, landing with her face against the brick wall, her leg awkwardly twisted beneath her. He thrusts his elbow deep into the middle of her back and pushes her flat onto the ground, then cups his hand against her skull until it is impossible for her to move. He is a very strong pirate.

He presses her face so hard into the ground that she worries her cheek bones will crush. The dirt smells distinctly like manure; she can feel the rough grit of it deep inside her throat. Her lungs begin to quiver and deflate.

He probably practiced this line just a few hours ago, after he made up his face for the night, put on his ruffled white shirt and satiny red eye patch, standing alone before the mirror.

His breath is so hot that she wonders if each time he exhales he sprays fiery embers, sending them deep into her ear canal where they sit and slowly seethe.

In every true crime book she’s read, every podcast she’s listened to, every Netflix docudrama she’s binge-watched, the victim survives by turning herself into a human being, talking her way out of being killed with heart-clenching kindness. After all, every rapist just wants a woman to be kind to him.

Maybe when he’s done, they will sit calmly together and share a cigarette. She will turn clever and calculating like a witch should be. She will convince him that she is not the stuffed animal of a girl he imagines or a female figurine carved from wood. She is not the American Girl doll he’s always wanted to fuck.

She will tell him about her childhood. The loneliness she feels. Does he ever feel like we are all just marionettes, controlled from above, tethered to the earth by tiny, teetering strings?

If she survives, there will come a time in the near future when she sits in a florescent-lit examination room and describes the uncomfortable details to a woman in a sea blue lab coat: the feeling of being gutted, the raw pain and crippling humiliation. This woman will pull from her pocket a camera and photograph every inch of torn skin, every rip, tear and bruise, every vaginal lesion.

Beyond the bushes, pressed upside down in the dirt, she spots a plastic orange pumpkin, abandoned by a trick-or-treater, the kind a child might carry as she rustles down the street asking strangers for candy in her store-bought, plastic princess costume.

The autumn air is cool and crisp. When he kicks her over onto her back with his steel-toed pirate boot, she catches a glimpse of the dark sky and that perfectly round ball of orange moon. She thinks of all the little girls out there in their princess dresses, clutching their plastic pumpkins, and shuffling from one lighted doorway to the next. 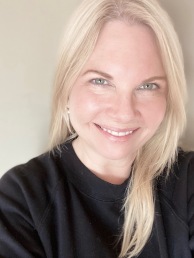 Jamy Bond‘s writing has been nominated for a Pushcart Prize and appeared in Furious Gravity, Wigleaf, XRAY, The Rumpus, The Sun and on NPR’s The Sound of Writing. She earned an MFA from George Mason University where she co-founded the literary journal So To Speak.