That year Sara used a chunk of her savings on a 40th birthday all-inclusive getaway, two days and three nights to Cancun. Larissa and Shannon jumped at the chance to drink on the beach in the dead of January. Night one, they all had a few too many pina coladas. Sara blacked out and woke to find a butterfly tattoo in black ink on her wrist.

That spring, every day on the way to work, Sara soothed her hangover with a McDonalds sugar free caramel latte. She sipped it slowly while creeping on the highway, then accelerated at her exit. She put her arm out the window and waited for something to soar.

It was the year Sara lost her job. Other than working at the mall in high school, she had never done anything but be a journalist. Her boss bought everyone a round of happy hour shots to say goodbye. He told her she was lucky to be so young, that it would be easier to start a new career this way. She didn’t feel lucky.

It was the year Sara decided to stop drinking. Still, she went to Oktoberfest, where Larissa said to get out of her funk. Shannon suggested maybe she should make a new Pinterest vision board. A guy they met at the bar said she just needed to get laid. She left the Biergarten to walk the neighborhood, canopied with golden ginkgo trees and leaves that flitted in the breeze like wings.

By New Years, when Sara made it to 30 days sober, she added to the butterfly tattoo: shades of orange, yellow, red, and brown between channels of fresh line work. As her skin healed, a Painted Lady’s graceful dorsal side emerged, flexed atop her carpal bones, and stretched its parchment-thin wings to fly away. 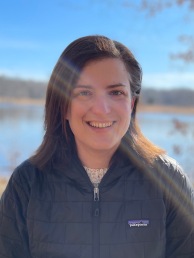 Kristina T. Saccone crafts flash fiction and creative nonfiction. Her work has appeared in 365 Tomorrows, The Bangor Literary Journal, Emerge Literary Journal, and Unearthed, and she curates Flash Roundup, featuring the latest releases in flash fiction. Find her on Twitter at @kristinasaccone or haunting small independent bookstores in the Washington, DC, area.