We squatted on opposite ends of our cell, backs planted against sweaty brick. We’d been ordered to negotiate our distance. Every time Gibson sniffled, my neck would draw up tighter than suspender cables. Though being cornered up in here with an old cracker like me had surely put a grievous task on him.

All socializing in Riverbend stopped some months back. No commissary. No hot food for seven weeks. Showers down to once every two, sometimes three. That did help with distancing, I had to admit.

They wheeled the dead past on package trolleys, zipped up in bags and trucked off like mail. Coincidentally, ain’t no one received a letter since this whole debacle began. Every cough on the block echoed like a nail being driven into the foot of a hollow coffin.

Gibby wasn’t nothing but a kid — maybe half my age, if that. Said he was in for some wrong-place, wrong-time, white-judge shit. I bought that, this being Tennessee. He’d been reading with some other colored fellas during yard time back when we had some. Said then he might want to be like somebody called Etheridge Knight. I said my story was probably just as good.

“No white man could ever tell what really had to be told,” he replied.

Still, we did tell stories to one another: about long-hauling my demons down through Tifton to Tallahassee, on up to Tuscaloosa and over to Texarkana, leaving a trail of blood behind me. He’d talk about how he had watched his brother sell dope in Knoxville; how he used to love the game; how he wished now he’d never saw a bag of nothing and never touched a single dollar and never held a gun in his life.

His mother had just passed from this sickness working down the row, yet Gibby got no reprieve to bury her. I thought that shameful. I definitely deserved to die for what I done, but I didn’t want no part in gasping like that, lungs on fire as Satan stole your breath.

Gibby cleared his throat; I heard his shirt peel off the wall.

“Whatcha think our chances be?” he asked.

A grin crackled through my stubble. “Seems higher every day, don’t it?”

He came to crying. “I miss momma.”

“She looking down on ya.”

The squeaky wheels of another trolley approached; the other inmates started squawking for some food. The guards just kept pushing. One wheel wobbled.

“You think God wanted this to happen?” he asked. 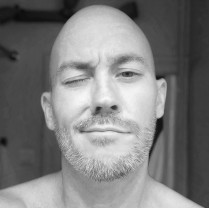 T.w. Moran: (@tdubwrites) hails from Humboldt, Illinois. Many moons ago, he studied creative writing at Lake Forest College and eventually earned an MA in English from Western Illinois University. After a pandemic-shortened but decorated tenure as a writing director at Beijing Language and Culture University, Moran now resides with his wife in Riga (Latvia). His writing has featured in The World of Chinese magazine, and he has new fiction slated to appear in The Dillydoun Review. His first novel in the works, Moran spends his days trying to make the best of perpetual lockdown by putting pen to paper.

“If you have built castles in the air, your work need not be lost; that is where they should be. Now put the foundations under them.”