“I’d say otters, but that’s what everyone says so I’m going to think of something else,” the little girl says, watching the family of water-weasels spin and swirl in their habitat like the ribbons she twirls in ballet class. “I wish I was that bendy, though.”

“Me, too,” I say, bending over to touch my toes, just to show her I still can.

We get purple juice boxes in the shape of grape clusters from the vendor, and she begs for Dots so I get her those, too. I’d give her the moon, like they say. She has a crescent one painted on her left cheek, a cluster of stars traveling up and over her brow.

“I’d say emus, because they look like dinosaurs,” she says, running a finger along their habitat’s fencing. “But they can’t fly.”

“Where would you go if you could fly?” I ask, knowing my own answer.

We keep walking. She tells me how most kangaroos are left-handed and they travel in groups called ‘mobs,’ that flamingos’ pink hue comes from their brined shrimp diet, and that stars don’t actually twinkle.

“It’s the Earth’s atmosphere that makes it look that way,” she says.

All summer we have been staying up late, hours past what used to be her regular bedtime, snuggling in sleeping bags on our patio lounge chairs, staring up at the sky. It started because she couldn’t sleep, which meant I couldn’t sleep, and fighting it seemed futile.

“Black holes don’t actually suck, you know,” she’d said the night before. It had been a long, rough day of appointments and blood draws and waiting around. “It’s more like a tidal force.”

She’s a force. She speaks like no other eight year old I’ve ever known, has spent more time in hospital waiting rooms poring over books and magazines than any adult I’ve known, knows more about so many things than she should ever have to know.

She runs to the kinetic sand display in the gift shop, and I ask her if that’s her One Thing.

“No, let me look around more,” she says. She is deliberate, never relies on whims.

She approaches the stuffy display and begins to pick one up, then the next: a plush turtle, a pink giraffe, a seal. She decides on a penguin and goes to sit outside while I put the penguin, the kinetic sand, and a giant lollipop on my credit card.

“I’m going to say bats,” she says, as we leave the zoo, her empty hand in mine, the other clutching a lollipop as big and round as her face, answering a question I’d asked when we’d first arrived, hours ago. “Did you know they’re the only mammal who can fly?”

“So, bats are your favorite? You know they can carry diseases, right?”

“I think it’s sad that everyone is so afraid of them,” she says. “There are so many worse things to be afraid of than bats.”

“True,” I say, checking the meter as we approach the car, making sure we didn’t go over. “What are you afraid of?”

Maybe it’s true. She acts like it’s true. Goes on learning everything she can as if adding to an endless collection of facts that she’ll use the rest of her life, however long or short that may be. Goes on with her life in the ways she knows how, pointing out existing constellations and making up new ones, pointing at the sky, night after night, finding newness where, all too often these days, I see only endless black. 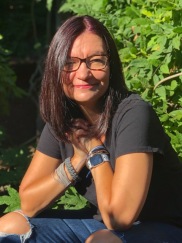 Kelle Schillaci Clarke is a Seattle-based writer with deep L.A. roots. Her stories have appeared or are forthcoming in Los Angeles Review, LEON Literary Review, Gone Lawn, Superstition Review, CHEAP POP, and other literary journals. She holds an MFA from the University of Nevada at Las Vegas, and was recently named the 2021-2022 Pen Parentis Writing Fellow. She can be found on Twitter @kelle224 and at her website: www.kelleclarkecreative.com.