But why not? she asks, perplexed

by the flaws in modern technology,

a clear lack of celestial networks.

She watches the clouds, a flutter of shadows

or pain, wonders if we´ll dwell in the same

abode. How do you map out death

for a child? Where on the sky´s boundless

landscape do you place a town, a country,

a winged paradise adrift on fancy?

Sunlight cascades through a break

of calling it magic. What would she make

of all these poems penned in blood,

pushed over precipices, buried in cemeteries

of fear? All these words deprived of air,

as if strangled at the hands of a godless

beast? So many times, I´ve leaped off

the end of a line hoping for sea rustle

and landed on the rock-edge of silence.

Will we have a swimming pool? she asks,

touching my cheek. What is there to say?

That I’ve become so good at bewailing

the untamed gray, the furrows around

creaking in my bones when I stoop

to bask in the rays of a mother´s lie? 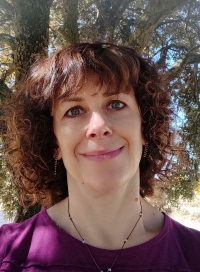 Julie Weiss´s debut chapbook, ‘The Places We Empty,’ will be published by Kelsay Books in July 2021. In 2020, she was a finalist in Alexandria Quarterly´s first line poetry contest series and for The Magnolia Review´s Ink Award. In 2019 she was a Best of the Net Nominee. Recent work appears in Better Than Starbucks, Praxis Magazine, Kissing Dynamite Poetry, and Anti-Heroin Chic, among others, and she has poems in many anthologies, as well. Originally from California, she lives in Spain with her wife and two young children. You can find her on Twitter @colourofpoetry or on her website at https://julieweiss2001.wordpress.com/.