Before my mother stuffed her boyfriend, herself, my sisters, and myself, in the car
to drive from Michigan to Massachusetts
to at long last meet that side of the family,
she cautioned us:
Don’t shout.
Don’t make loud noises.
And especially
Do Not speak any German in the presence of Babcia.

Years later, When my cross-country team and I circle together
to stretch, do pushups, and sit-ups before running,
one of the boys begins to count in German.

Another boy joins in, and another until it is a screaming match
to see who can count loudest.

The language barks like a German Shepard. And though they only count to zehn,
I flinch at each number
like a gun has gone off. 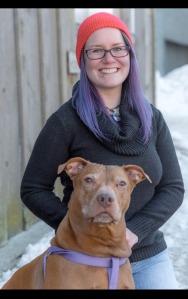 Lynne Schmidt is the granddaughter of a Holocaust survivor, and mental health professional with a focus in trauma and healing. She is the winner of the 2020 New Women’s Voices Contest and author of the chapbooks, Dead Dog Poems (forthcoming from Finishing Line Press), Gravity (Nightingale and Sparrow Press) which was listed as one of the 17 Best Breakup Books to Read in 2020, and On Becoming a Role Model (Thirty West), which was featured on The Wardrobe’s Best Dressed for PTSD Awareness Week. Her work has received the Maine Nonfiction Award, Editor’s Choice Award, and was a 2018 and 2019 PNWA finalist for memoir and poetry respectively. Lynne was a five time 2019 and 2020 Best of the Net Nominee, and an honorable mention for the Charles Bukowski and Doug Draime Poetry Awards. In 2012 she started the project, AbortionChat, which aims to lessen the stigma around abortion. When given the choice, Lynne prefers the company of her three dogs and one cat to humans.