Patrick meets Lawrence at Blanc Gallery in Salcedo. He’s writing about the opening of a student show and encounters a fellow writer covering the same show for another student broadsheet. They are both staring at a sculpture they couldn’t decipher. The description reveals that it’s a clay-model of the female anatomy, a shape they are both unfamiliar with. They spend the rest of the evening debating what the artist is depicting in her piece as if they really know what they are talking about. They converse with gratuitous pointing and clever-sounding onomatopoeias (I’ve got it “Ahs” and I understand where you’re coming from “Hmmms”).

“I believe that the curvature of the vessel represents the twists and turns of her questionable youth,” Lawrence says with his deepest voice.

The energy between them could be cut by a butter knife. The event ends and they head towards the same direction – Patrick to his Toyota Camry and Lawrence to his uncle’s vacant condo. They continue talking about inane college topics like their respective degrees and college party mishaps. Then it begins to rain.

Rain. It’s a sign, Patrick believes. They huddle underneath the entrance of a closed building, smiling silly, Lawrence’s bangs moist on his fair smooth skin.

“Doing anything after?” Lawrence asks with one hand in his jacket pocket and the other cradling his iPhone.

“Nope.” Patrick says abruptly, surprising himself. He wanted to wait a couple of minutes to seem cool, to make it appear as if he was going through a Google Calendar in his head, reviewing his evening’s festivities, but the anticipation got the better of him.

Patrick had yet to define who he is, unlike Lawrence, but dares to predict the possibility. He pulls down a lever in his brain and gives himself permission to accommodate Lawrence.

Dressed up (Patrick in a slim white button-down, Lawrence in a light Millennial pink shirt) with gin and tonic in their hands, they feel cosmopolitan like the journalists they idolized and read about in the Philippine Star. After their third cocktail, they bop to the Spotify-playlist that pre-empts the DJ while in a deep discussion about their favorite Wes Anderson movies, Patrick’s words start to slur. The 10 inches between them slowly diminishing.

Noticing how the crowd is much older than they are, Lawrence asks, “Let’s check out the other bars?”

Patrick replies “Go,” uncharacteristically, and gives him the cheesiest smile, teeth and all.

Unaware of how much alcohol they’ve consumed, they run through the street hand-in-hand looking at both sides, afraid to lose each other to the crowd.

They continue to hold hands by the bar. The black and red lights mask Patrick’s blushing fingers, his finger follicles like magnets for blood; maybe it’s the alcohol or the surprisingly rough hands of Lawrence.

Lawrence drunkenly tries to fill in the silence with a topic Patrick doesn’t even try to comprehend. Patrick leans in for a kiss, something he’s always wanted but had always been afraid of. Their kiss is like slow-motion sequence in an action movie; the underage drinkers who are dancing and singing along to the early 2000s R&B and Hip-Hop slow down to a blur while Patrick and Lawrence are by the bar.

Outside, under the harsh street light, Lawrence holds a cigarette with one hand and clasps Patrick’s with the other. A sober Patrick unlatches and steps away into a shadow cast by a nearby building. “I don’t like smoke,” he says.

At home, Lawrence messages Patrick “goodnight,” to which he accidentally replies “you too.” He feels a deep-seated obligation to reply some more.

They exchange GIFs and emojis and impractical life goals over text. Lawrence enjoys this, and regretfully, so does Patrick. Then as Patrick softens back into the only reality he knows, he cranks the lever in his brain back to where it was before. Plans to meet cancelled. Texts unanswered. Friendship request rescinded. A relationship between two people in their circumstance wouldn’t last.

After a few days, his memories of that night silo off into categories, one box for when he wants to think of Lawrence fondly, another for burying deep into the closet. Their night devolves into a supercut, a looping highlight reel to be played in a corner of his mind. He keeps a cigarette butt from that night in a wallet he holds in his back pocket. The heat of which continues to singe his bottom. 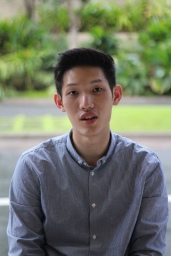 Ken Coseto is a content marketer based in the Philippines. His work has appeared in Rappler and Scout Magazine. He lives vicariously through characters on page and on screen.

“If you have built castles in the air, your work need not be lost; that is where they should be. Now put the foundations under them.”