I jump from bed at the sound of the garage door rolling up. It’s early morning, a little before sunrise. Somebody’s breaking in; I’ve been hearing about burglaries around the neighborhood. I reach for my phone to dial 911, then, remember that my son, Josh, passed his driving test yesterday. There’s another driver in the house now, besides me. But where is he going this early in the morning?

I run downstairs, clutching the terry robe to my chest. I reach the garage just in time to watch—from the diminishing gap between the descending door and the floor—Josh pull out in my gray Honda civic, its tires crushing the early fall leaves. My stomach drops. Despite it being September, I feel the chill of January in my bones.

Last January, the three of us —my husband, Dan, I, and Josh —were watching news at the table. A night like any other: kitchen hot from the cooking, I fanned myself with a plate, directing garlic-laden air to my face. Dan took a bite of the lasagna. “The pasta is a little…” he started. I dumped my plate in the sink and flounced out. Enough of the compulsive culinary criticism—the over salted beans, the undercooked rice, the chewy bread. The price you pay for a man who can cook.

“Wait, what?” Dan followed me. Josh kept working his fork and flipped the channel to a football game.

I yelled at Dan for not appreciating my food, for leaving his beard trimmings in the washbasin, for not refilling the water bottle in the bedroom, for wrapping the shared blanket around his body every night. He stood, with a hand on his salt-and-pepper jaw, staring at a bald spot on the carpet, quiet and still as a rock. I whooped internally at this little triumph.

I awoke to the sound of the garage door—thunderous in the quiet of winter—and reached just in time to watch Dan’s taillights become pinpricks, then vanish into the moonlit night. My knees trembled; I slumped on the floor, the cold draft from beneath the door washing over my body. After a few minutes, I rose, slowly, and went inside. As I locked the door between the house and the garage, I heard footsteps retreat behind me. Josh was climbing the stairs back to his room. He did not question or discuss anything. Not that night, not the next morning.

At dinner, he swallowed the fried chicken and excused himself from the table while I was still eating. Thereafter, he started taking his meals to his room on the pretext of completing his homework. His sentences became shorter, his answers to the point, conveyed in nods or monosyllables.

I support my right knee with my hands— I forgot to wear the knee sleeve in the rush— and lower myself to the wooden steps of the garage. The stale air circulates from the dust-covered lawnmower, to the cobwebbed tools, to the deflated bicycles, to me. 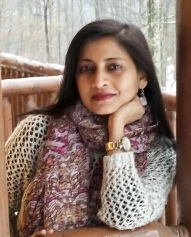 Sara Siddiqui Chansarkar is an Indian American. She was born in a middle-class family in India and will forever be indebted to her parents for educating her beyond their means. She is a Pushcart and Best of the Net nominee. She blogs at Puny Fingers and can be reached at twitter @PunyFingers.