Damon: All three of the pieces are beautiful in their destructive nature, was it difficult to write them?

Christopher: There are ways it can be tricky to write any piece of writing, but it really depends on the particular form at any given time. I think some of these poems were harder to write than others in terms of wrestling with technical aspects, but that’s not unusual. A poet friend of mine said that if the poem feels too easy or knowable, then there’s something wrong. Close(s)t was probably the most instinctual to write though. A lot of my work does focus on destructive qualities in some way, but I also think it’s important to find beauty in those moments, otherwise the world would be pretty bleak overall. I guess it’s about finding some sense of optimism even in those darker places. I suppose in that sense there’s something therapeutic about that working through that a poem, or other piece of writing, can give you.

Damon: Who are among your influences, either literary or otherwise?

Christopher: My influences tend to change over time but there are some people I continuously admire and respect. Jericho Brown, Danez Smith, and Wayne Holloway-Smith are all fantastic poets who write in really interesting ways that don’t necessarily adhere to what is expected or has been done before. All of them are able to rework pre-existing forms into something new and fresh. I also appreciate some of the upcoming poets in the UK like Ella Frears, Bobby Parker, and Troy Cabida to name just a few. 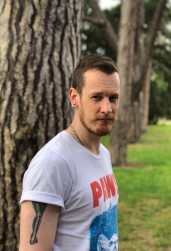 Christopher W. Clark (@chriswillclark) reads, writes, and teaches things. Their poems have featured in various publications including The Cadaverine and Ink, Sweat, & Tears. They have collaborated with The Royal Philharmonic Society and photographer Mick Frank among others. They are currently working on a chapbook and full-length novel dealing with the intersections of class and queerness.