I turn around and watch your silhouette
fade into pale city lights. Tonight I am the
main role, the femme fatale with Technicolor
red lipstick & with rain-slicked hair. I read
folk tales turned into poetry in the lobby of a
one-screen theater, head bobbing to the ending
song of some nineties Korean film. I remember
Seoul. Those maddening streets filled
with monsoon rain, throwing a soju bottle
against a wall so hard the shards became
a kaleidoscope, how the city itself seemed
in-between something. The femme fatale was the
girl next door who wrote love poems in hangul
to English, English to hangul, during her commute.
You forgot all about this—that’s how much
you loved me. Now I wear a black silk dress,
hair tied up, smudging my berry red eyeshadow,
and play with a lighter on a Brooklyn
fire escape, scattering the ashes of screenplays
into the night. I’ll rewrite my own legacy.
With trembling hands I’ll cover the camera lens—
stop filming me. I don’t want you to see me cry. 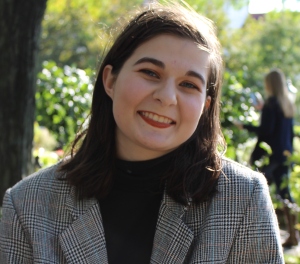 Ashley Hajimirsadeghi’s work has appeared in/is forthcoming from Mud Season Review, Rust + Moth, After the Pause, and The Shore, among others. She was a Brooklyn Poets Fellow, and attended the International Writing Program’s Summer Institute. Her website is http://ashleyhajimirsadeghi.squarespace.com/