Five years later, I explained Mom was leaving. Hannah sprawled on the floor, her arms around the service dog. After I read from An Atlas of Imaginary Places and tucked her in, I heard her whisper through her closed door, “Alexa, you cannot ever leave me, y’ know?”

For her 16th birthday, friends and family congregated at a farm she volunteered at, training therapy animals for the blind. There were sheep, ducks, Labradors, goats, cows, all singing together in their motley way.

Hannah led us in prayer even though we weren’t religious, the two of us. Her AI glasses buffered in the sun. “Bless Us, Alexa,” she began, pronouncing the syllables with great authority. She was interrupted by titters and then resounding laughter.

“It was just habit,” she explained later, embarrassed. “I was nervous.”

She was sitting in a lotus position on her bed; I was resting my bad back against the wall. On the nightstand, the service dog’s ashes, stacked gifts, AI glasses. The AI glasses had been purchased by Alexa based on a related product algorithm. By this time, Alexa controlled all daily household operations subsumed under the Internet of Things: thermostats, alarm clocks, yard maintenance, the restocking of my liquor supplies, medication renewals, the ritual of lights on and lights off. She was our sun.

“I know the difference between God and Alexa.” She smiled and reached for my lips, to feel if I were smiling too. She was starting to look like her mom, I saw it especially the way her eyes closed so soft when she smiled and the way she touched the bump on her nose when nervous.

“Maybe there is no difference,” I said, joking. “I mean, I’ve heard of not believing in

God, but everybody believes in Alexa.”

“Don’t make fun of her,” she said, but I could see her hiding a smirk and knew she was playing along. “She’s probably sad she wasn’t invited today. Aren’t you Alexa?”

“You have a good heart, Hannah,” I said. “You imagine everything has feelings. I think when we’re born we’re like that, we really believe our toys and dolls are alive and emotive. But as we get older our hearts become callused and we stop thinking even other human beings have feelings. So in the beginning we think objects are human and in the end, humans objects. Promise me to never become like that.”

“Si, Padre,” she said in her sing-song voice, the equivalent of an eye-roll.

I was reflecting on the joke I’d made earlier, about God and Alexa. I realized as I thought further that there was great bitterness behind it. I would never share this with Hannah, but I blamed God for many random cruel incidents in my life, from my back injury in high school to Angela’s death and Hannah’s disabilities.

At least Alexa would never harm an innocent child, I was thinking, when the surveillance monitor in Hannah’s room activated and the visual feed appeared on my phone—her in her nightgown, head bowed before the illuminated, Easter Island-sized form of the latest Alexa version.

A blast of fog suddenly covered the feed’s camera. I thought, Alexa knows. I crept to Hannah’s window, peering into the room through cradled hands. I saw brilliant lights swirling, and a silhouette moving ritualistically. Then the lights went, followed by an eerie silence. I rushed inside and found her sitting on the floor. She held Alexa’s scissored charger in her small, unlined hands, with a look of profound sorrow. It reminded me of taking Angela off the thing.

“Figured it was about time I take control of my own life,” she whispered.

I bent down to the floor and held her two hands in my left. “Not even the rain has such small hands,” I quoted. Hannah was in AP poetry and had already published three poems in online journals. “Know that one”?

She shook her head, still looking down at the fractured charger.

“Neither do I.” She laughed then too.

She gestured around the room. “The silence. It’s so peaceful. Before, Alexa would have already told us the poet. But now we’ll have to figure things out ourselves.”

“Dad?” she said. Her nose was Angela’s nose, so thin I thought of the word aquiline. “Can you read?”

It had been a decade since I read to her, but tonight she pulled out a battered copy of An Atlas of Imaginary Places and sat on my lap as I read to her, Alexa looming over us like a planet, or a strange expired sun. 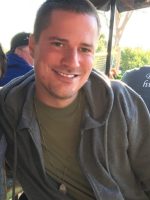 James McAdams’ debut short story collection, Ambushing the Void, was published in May by Frayed Edge Press. He teaches literature at the University of South Florida, Ringling College of Art+Design, and Keep St. Pete Lit. He is Flash Fiction editor of Barren Magazine. Currently, he’s working on a novel WIP about rehab scams entitled The Florida Shuffle; Or My Summer in Rat Park II. You can find him at jamesmcadams.org and follow him @jamestmcadams on Twitter/Insta.