The elevator doors slid open and I stepped out into the corridor, sneakers squeaking on the glossy floor. I moved toward the unit desk carrying my provisions:  Double-Stuf Oreos for the nurses, Wendy’s chili for my dad. I detected the familiar scents of floor wax, Dreft detergent, canned peaches from the dinner trays, and a faint whiff of bedpan underlying it all.

“Hi Edie, how’s he doing tonight?” I asked, nearing the nurses’ station. A constant subliminal hum and intermittent soft blips issued from the monitors as Sheila and Meg, the evening shift, charted and sorted meds.  Edie looked up from her paperwork as I deployed the Oreos on the counter.

“Oh, thanks, hon,” she said, with a warm smile.  “He’s been a party today. Turned his call light on during shift change…when we didn’t get to him right away, he went with the bedpan trick again. Pitched it out of his room, overhand.  Hard.  Like Koufax on the mound!”

Mortified, I started to say how sorry I was, but Edie laughed. “On the bright side, this time it was empty.  Besides, nothing will ever trump him yelling FIRE in the middle of the night.”  I shuddered. That time I’d had to sternly instruct Dad that it was not considered “all in good fun” to yell FIRE in a geriatric unit where bed-bound patients would try to spring up in search of an exit.

I marveled at the nurses’ eternal good humor, the way they flirted with Dad, turning him from petulant old man into roguish libertine within seconds of entering his room.  He once threw back the blankets while Meg was changing his IV and invited her in.

Reaching his room, I pulled back the curtain and found Dad sitting up in bed, bright-eyed and glowing with color, which meant he’d had his dialysis run that afternoon.  Clearly feeling perky and puckish, he harrumphed how it was about time I showed up.

“I was here this morning, Dad,” I replied quietly. Of all the distressing features of his advancing illness, his unshakable belief that I had abandoned him and never visited was, for me, the worst.

“Nonsense,” he snapped. “I had to ask Edie if she’d seen my traitorous daughter lately.”  I blessed Edie for keeping that one from me, then fought back sudden tears of exhaustion, realizing anew with a fresh spill of sorrow that I’d lost my dad; the one who used to introduce me as his guardian angel.  Dad’s kidney disease had wreaked havoc on his body, producing a bacterial infection in his spine that had consigned him weeks ago to the Bethesda Convalescent Facility for long-term IV antibiotic therapy. The infection had brought on dementia, leaving my funny, generous father a bitter, querulous old man who forgot my visits and called me a traitor for not bringing him home. I set his Wendy’s chili on the rolling table next to his bed.  a plume of cumin-scented steam arose from the chili when I pried the top off, making my stomach growl.  It had been a long day.

But as often happened on dialysis days, a gasping snore indicated that Dad had suddenly lapsed into deep sleep. I dragged the heavy hospital chair over and sat down, waiting to see if he’d wake. He did not. Finally, I rose and kissed his stubbled cheek, then went to stow his chili in the unit fridge and bid Edie goodnight.

“He’ll have to be shifted,” I said. “He’s sound asleep, but still sitting up.”  Seeing my pink eyes and damp cheeks, Edie’s eyes softened. “Don’t worry, we will.  Goodnight honey…you’re a good girl.”  I blew her a teary kiss and headed for the elevators.

As the days of our sad routine turned to weeks, I felt my dad slipping through my hands like the pink sands through the tiny, wasp-waisted hourglass I kept on my desk.  Like that slender, flowing stream, I felt my father’s remaining days distilling down, lightening, vanishing. Finally, it was Edie, Meg and Sheila that gently helped me understand it was time to take my dad home, that the dialysis had stopped buying him time and started stealing it.  The three women, off-duty, visited him faithfully in those last day and in the end, it was them holding his hand and my own, when he finally went home. 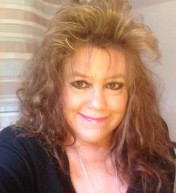 Tara Flaherty Guy is a free-lance writer living in St. Paul, Minnesota.  Her work has most recently been published in Talking Stick Journal (1st Prizes in Humor, Fiction and CNF), Miracle Monocle, The MacGuffin, and Longridge Review, among others. Her newest work is forthcoming in Grande Dame and the St. Paul Almanac. Guy has a BA in Creative Writing from Metropolitan State University in St. Paul, where she lives with her husband and three cheeky cats.