On Wednesday, Jimmy found the marble in between the couch cushions. Before Mom died, he remembered her throwing all the marbles out. James might swallow them, he could die, she said under her breath, one night after dinner, as if Jimmy couldn’t hear, then poured the jar into the trash like a glass of water down the sink, the marbles crashing into the bin like hail. Like something that won’t let you forget.

That night, Jimmy opened his box of lost things—a wooden skull-and-crossbones chest he kept under his bed. Inside it: his favorite rocks from the garden, a piece of petrified wood shaped like a shark’s tooth, a few smooth sticks stripped of their bark, and now the marble, as slippery and smooth as a promise.

On Thursday, he ate pancakes that Dad had made, tough and burnt around the edges. Sorry little man, no whipped cream, he said, ruffling his hair. And then, I miss her too.

That night, even though Jimmy surely was old enough to know better, he pulled out the box from beneath his bed, opened it and held the marble up to the light. It was yellow and purple and Jimmy was certain it would taste like the lemon and blueberry muffins Mom used to make, and certainly like nothing dangerous as well. In his mouth, the marble was cool. Cool too, as it slipped all the way down his throat, as sweet as he imagined.

He woke up the next day—Friday—alive and six-years-old. Dad sang him the cheerful birthday song and they ate pizza from the pizza man, cake from the grocery store, and all the candles went out when he blew, but the cake still tasted like cotton; he needed a glass of milk to swallow it down. They watched Peter Pan on the couch while Jimmy slipped his hand between the cushions again, hoping to find another marble, but surfacing with only a few pretzels in hand and some stale goldfish faded orange to beige.

That night, Dad followed all the steps Mom used to before bed: washed his face, brushed his teeth, tucked him in, kissed his forehead, Goodnight, little man, but Jimmy cried anyway. After, he swallowed one of the smooth, white garden rocks. It was coconut Sno-Cone from the cart at the park. It was Mom pushing him back and forth in the swing, smiling upside down at him as he flew. It was whipped cream clouds on perfect golden pancakes, melting, soaking sweet into the cracks.

He woke up on Saturday, alive again. Maybe Mom was wrong.

Dad decided that this day was a beautiful one and they would take a trip to the coast, like they all used to. The sun was indeed winking warm behind the clouds, and Jimmy swung his legs with excitement Dad strapped him into the carseat, telling him of salt water taffy and caramel corn and all the treasures they’d uncover that washed up on the shore. Jimmy checked his pants to make sure they had pockets and felt like a flower had bloomed inside him.

They ate clam chowder for lunch, then filled a big bag at the candy store with all the flavors of taffy. They unwrapped one flavor after the other to chew, as the walked down the beach and kicked up treasure.

Jimmy found a sharp black rock shaped like an arrow, and another that looked like Jupiter, as flat and wide as his palm. He found fifty cents of a jagged sand dollar, a handful of silvered half shells, and a soft jewel of smooth, green sea glass.

The sun came out to heat their backs and warm the sand beneath their feet, the sky a cloudless, constant blue Jimmy didn’t think he’d ever see again. All the treasures fit just right in his pockets and he fell asleep on the way home with raspberry taffy still stuck in his teeth, dried sugar around the edge of his lips.

That night, Dad followed all the steps his Mom used to, again: washed his face, brushed his teeth, tucked him in, kissed his forehead. Goodnight, little man.

That night, he chose the sea glass. 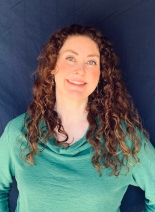 Meagan Johanson is a writer from Oregon, where she lives with her family and one very good cat. She enjoys playing the piano, watching things grow, and sticking the landing on a new recipe. She is always seeking a new obsession, and has lived many exciting lives, at least in her imagination. You can find her on Twitter: @MeaganJohanson.