What I’d forgive is having sex in the hallway, on the red oriental rug that runs from bedroom to bathroom. Above you, the pictures of Paris—a windmill, a cobbled street in Montmarte, Rodin’s Thinker, a flower pot holding red geraniums, hanging from a wire basket along the grand boulevard. The pictures, striped by sunlight that falls through the maple tree and then the bedroom window come afternoon.

But I wouldn’t forgive if it happened in the four-poster bed where we used to lie curved like prairie dogs warm in their burrow and watch episodes of Planet Earth.  I’d lie on the pillows and talk to you in the voice of David Attenborough, whose gravitas was never more appropriate than when that female bird of Paradise flew away, flitting off-screen towards the sunlight piercing the tops of the trees and the camera returns to the forlorn male, alone now, and Attenborough chimes in, “Sometimes, even your best isn’t good enough.” We laughed at his voice, so British, so wistful for that fat, dancing bird who’d spent all morning using a stick to sweep the log where he’d be doing his dance. At the critical moment, his tail feathers turn up like a peacock’s, creating the illusion of an electric blue mouth, cartoonishly large, and he hops back forth on the log, deranged looking, hopeful.

What I’d forgive is driving the Honda through the hot streets, past bikes that lean on garages, past small rectangles of lawn, past the oaks, dusty and tired in summer, to the restaurant where you can get margaritas for two dollars on Wednesdays before 8, and eat a basket full of chips, crispy and fried, so perfect that you can’t avoid shoveling them in like an addict and asking for a second basket before you’ve even ordered food, politeness be damned.

What I’d forgive is you drinking tea from those small porcelain cups that your maternal grandmother gave you, with wisteria climbing the side of the glass. And you, waving away bits of steam as you look out the window at the city—a tableaux of fast-food wrappers, shattered bottles, and bits of grass, green and ineffectual, a line of crows sitting on a telephone wire that quivers in the breeze, a drug store bag blowing slowly through the street, until it comes to rest under a car’s old tire.

Remember how every time I’d make you a cup of tea, I’d walk from the kitchen and into the small dining room, asking if it was hot enough for you. You’d say no, and I’d lift my sleeve and turn, my arm stretched over the back of the kitchen chair, so you’d see my flexed tricep, and I’d ask whether that was hot enough for you. And you’d smile and tell me to make myself useful by picking up a chocolate croissant and leaving you to your crossword and Earl Grey.

What I’d forgive is driving down the highway where the speed limit is only fifty-five, to where the pines give way and the water meets the shore. And where you can sit on a stone wall, throwing bits of cheap bread to the gulls, their wings scything the wind as if it were hay.  But not the way you used to rub in sunscreen, SPF 30, always doing it with your mind elsewhere, such that I’d return from the beach with burn marks, and the shape of your careless fingers etched around the burn.

Remember when I used to walk up the trail making bird calls? My handheld vertically in front of my mouth as I imitated grackles, wrens, and crows, calls I’d memorized on the long nights you stayed out drinking with friends.

And I’d squawk back at you. And when you asked again, I’d shrug and say, “I can’t make out a bird you’re saying.” And you’d roll your eyes, your luminous brown eyes. Later, we’d tumble into our hot double bed, with the down comforter still on, and we’d sleep like two overheated angels, shooting down after the fall.

I wouldn’t forgive a damn thing, so stay here on the porch, and we’ll watch the fireflies wink in and out, listen to trees clacking in the wind. I’ll make tea. And we can sit and talk on these front porch rockers as the darkness shapes the world around us, about the fact that sometimes even your best isn’t good enough. 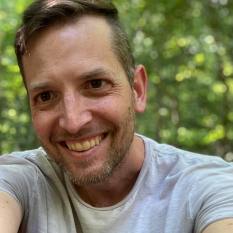 Andrew Bertaina received his MFA in creative writing from American University. His work has appeared in many publications including: The ThreePenny Review, Witness Magazine, Redivider, Orion, and The Best American Poetry 2018. More of his work is available at www.andrewbertaina.com